What is a Kuripe Self-Applicator Rapé Snuff Pipe?

A Kuripe pipe is a small, portable, v-shaped blowpipe traditionally used by the indigenous peoples of South Amercia for the self-application of rapé (hapay) snuff which is taken usually in a ritual or ceremonial setting.

What other names is a Kuripe known as?

Other names for Kuripe include, Kuripi, Curipe and Curipi. In Brazil a Kuripe is known as an auto aplicador de Rapé.

How do you pronunce the word Kuripe?

Rapé is pronounced "hapay" in Brazilian Portuguese and "rrrapay" with a rolling "r" in Peruvian Spanish.

How is a Kuripe Pipe Made?

A typical Kuripe pipe consists of two hollow tubes joined together at an of angle of between 30-50°. In well designed Kuripe there is a shorter mouth piece that is taken into the lips to be blown and a longer nose piece that is inserted into a nostril.

The joint of a Kuripe can be glued with adhesive, bound with twine or decorated with simple or ornate moulded clay and adorned with beads, crystals or feathers.

Some Kuripe featured a long landyard to enable a person to wear the pipe around the neck.

What materials are Kuripe Pipes made from?

The most common material used for a Kuripe is taboca - brazilian bamboo. Other materials include palo santo wood, jaguar bones, monkey bones, water bird bones and serpentine stone. Many tribal peoples use natural adhesives including a mixture of beeswax and latex rubber and twine sourced from plants including the veins of banana leaves.

How to I choose a Kuripe?

It's all down to personal choice, taste and budget. The Kuripe self-applicators I offer are simple, raw, effective and functional. There are Kuripes on the market that have clay sculptures in the style of different animals such as bears, snakes, birds. There are Kuripes that have different types of crystals as tips. I keep my Kuripe designs clean and avoid placing anything on the sharp tip as it has the functional purpose of dividing a pile a Rapé in half for each nostril.

With regards to Kuripe size - through experience my pipes are almost a universal fit. It you have very small or indeed very large nostrils and want a custom pipe just let me know and I will make it for you.

How do you use a Kuripe?

To use a Kuripe you will notice there is a short end for the mouth and a long end for the nostril. For a first time tip a small maybe, half-pea sized pile of Rapé in the crease of one hand. Please be aware some types of Rapé can be very powerful and make you purge so please start small. With Rapé in the crease you wil be able to close your hand and the Rapé will stay in the middle. Tap the Rapé flat with the nose tip of the Kuripe and then using the pointed end on the Kuripe divide the Rapé into two. The nose tip on the Kuripe I make has an intentional very smalll scoop to allow you to scoop up half the pile. If the Rapé is moist you may wish to tap the Kuripe to push the Rapé down the tube a little. Take the long end of the Kuripe pipe and place it in one nostril. Breathe in with your mouth and place the short end against your lips. Now you can blow out with your mouth into the Kuripe which will force the Rapé into your nose. Repeat this process as a matter of balance with your other nostril. Once you have the hang of this you may wish to try some of the special Rapé blows illustrated on my website. 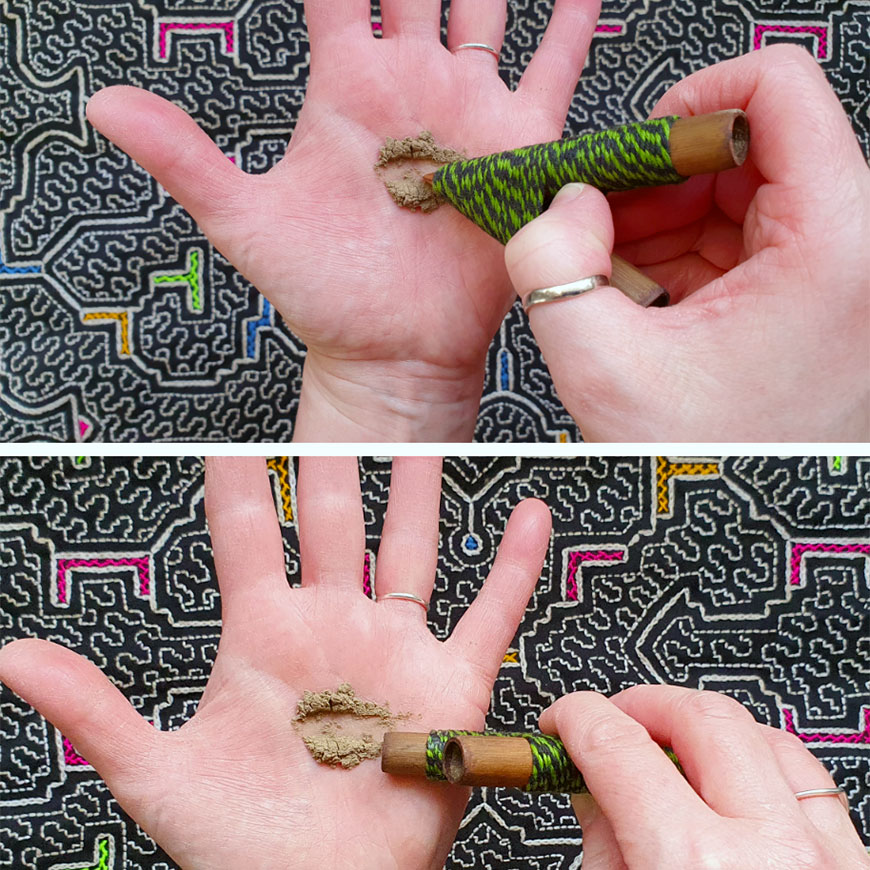 I do not recommend using Rapé casually. Please humbly acknowledge the power it carries always approach it with respect and intention.

What is the cost / price of Kuripe?

The price of Kuripes varies from around £15GBP to up to £200GBP for an antique, tribal bone Kuripe.

How to clean a Kuripe Pipe

Cleaning a Kuripe is easy. After each use I recommend wiping the tips with a soft tissue. If you use a Rapé that is very moist it may be worth cleaning inside with barrels with a Q-Tip or cotton bud. For the best hygiene or if you pass it to a friend you can sterlize the tips by passing quickly over a candle or lighter flame taking care not to burn the wrapping.

As wood is a precious resource please be assured all Kambo Spirit pipes are environmentally friendly and made from taboca hardwood reeds - a fast growing, self propogating, sustainbly harvested resource. All packaging used is recycled.